By Andrew StoneNovember 26, 2019Blog
No Comments

Thea Ramirez has never been one to take the easy route. She is an incredibly dedicated CEO, wife and mom of three kids who balances the hundreds of daily tasks involved with running her successful non profit organization. After talking to me today, she had to prepare a dish for a potluck event at her kids’ school that afternoon, get on a weekly stand-up call with her tech development team and then meet with donors, to give you just a snapshot of a normal afternoon for her.

“I am a clinical social worker by training and originally had my sights on becoming  a counselor” Thea tells me, but quickly realized this wasn’t her calling, finding a job as a director of a private licensed infant adoption agency. This would set her on a path to founding Adoption-Share, the non profit organization that created the Family-Match program.

It was the Family-Match program that connected Ramirez with Hopeland when we worked together on a screening of Instant Family in New York. Ensuring every child has a safe, loving family is a cornerstone of both organizations.

Thea’s early experiences in adoption fueled a passion to create an organization that is really upsetting the apple cart, first in private infant adoption and now in foster care.

“I had gone into private infant adoption thinking this was going to be amazing, it’s going to be helping families and kids but actually found it to be an industry with a lot of money changing hands, a lot of attorneys coming to hospital rooms and giving out checks”. “It just felt wrong”, said Ramirez, explaining that she felt called to action by a feeling that it wasn’t enough to just leave that job behind but that she had to do something to truly help – “that something became Adoption-Share.”

“I launched the organization right after having my second child,” Thea remarked, “there’s no better time when you’re not sleeping anyways, so I maximized the hours between 1am and 6am for the first six months and did everything to get it off the ground.”

What needed to change?

I asked Thea to paint us a picture of what needed to change.  “In the early days, when I was just starting out, I knew I needed a way to cut around the industry-like arm of the private infant adoption agency that really demanded families go to a brick and mortar organization; pay thousands of dollars; and then get a number and wait in line.”

“What made it worse is that these families would think they were in a line, but you’re not in a line, you’re in a pool and that pool is not objective, it’s very subjective. In some cases you’re chosen not necessarily even by an expectant parent you’re chosen by what is in the best interest of the agency and how they can best optimize their pool of financial dollars.” 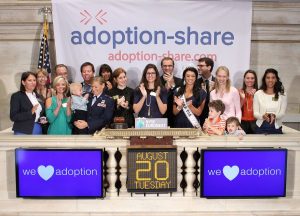 On the other hand, Adoption-Share says as long as you have a home study and you’ve been licensed by a child placement agency that’s licensed in your state you should be able to work with any licensed agency in the country. It was this realization that led to the creation of an online network to provide a way to allow home study approved families to work directly with licensed child placement agencies.

Was there a special moment that told you it could work, I asked Thea? “I think that the kicker for us was when we had two active duty parents in the Air Force who had just completed their home study and were both deployed, get matched on our network while serving overseas. 42 days after coming home stateside from their deployment they were holding their son for the first time in a hospital room!”

Great moments like these generated a lot of publicity for the organization, they were featured on CNN and invited to ring the opening bell at the New York Stock Exchange. “What we were doing was unheard of, people were finalizing an adoption through our online network within eight months of starting their home study process.”

We quickly realized that though a completely different process, the barriers keeping children from achieving permanency through adoption in the foster care system mimicked what we had seen in the private infant adoption community.  Families are being corralled into pools whereby they are visible only to the placement workers from their own agencies. This fragmentation of an entire population of waiting resource families is where we saw an opportunity for the biggest improvement. You literally have families in every state across this country waiting longer to adopt kids from foster care than the kids are waiting to be adopted. For decades we have misdiagnosed the issue as having a lack of demand when truthfully what we have, and what we are helping correct through our Family-Match Program, is solving what is fundamentally a connection problem.”

Family-Match is solving the connection problem by helping workers more efficiently and appropriately connect waiting children with waiting families. Designed as a centralized repository or common platform for an entire state, Family-Match leverages its proprietary compatibility assessments authored by former senior researchers from eHarmony to help ensure that to the extent possible matches made on Family-Match are matches that can last a lifetime. By using algorithms and digital technology to place children with the best families who are going to provide the stable, loving home a child needs Adoption-Share has really changed the way we leverage data for child welfare.

“Family-Match is operating currently in the Commonwealth of Virginia and in the State of Florida with plans to hopefully roll out in Tennessee as well. About eight other states have reached out to find out how to start the process.”

This interview was timed to coincide with Adoption Awareness Month and Ramirez told me that Adoption-Share wants to use November to highlight the waiting families, families that are approved and licensed, families who have gone through the arduous process of becoming home study approved and yet their homes are sitting empty.  “We should be putting those people up on billboards and interviewing them on the news.”

If you’re inspired by Adoption Awareness Month then “there are ways that people can step up and help. It could mean becoming a respite family, someone who can give another foster parentor adoptive parent a date night or a weekend off from fostering”.

“There needs to be an army of people that are just willing and licensed and safe to take in kids to give people the respite that they need. And then there’s other ways: offering to transport kids, mentoring, you know, there’s so many ways that people can help”. You can find out more about the need to mobilize American families to support vulnerable children here.

A Reason to be hopeful?

Is there a reason to be hopeful I asked at the end of our interview. “Absolutely! I would not be doing this without that as the very  beacon we are all running towards. There has not been a more solvable problem that can be achieved in our lifetime. We know mathematically that the numbers are there.  There are over 120,000 kids in this country that have a goal of adoption and we know that the number of willing and interested families is over 200,000.

“Ensuring every child with a goal of adoption knows the warm embrace of a forever family is something that can be achieved.”  Indeed, for those reading with a desire to learn more- Thea is eager to tell you how. For more information go to adoption-share.com