On International Women’s Day, Hopeland was honored to be awarded the EPIQ Women’s Advocacy Award in recognition of our work to empower safe, loving families, and the women who play such an important role in them. 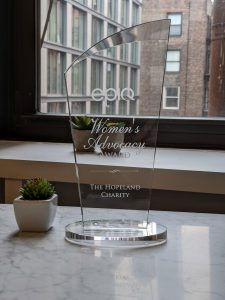 The award ceremony took place as part of the New York City Bar Association’s International Law Conference on the Status of Women at the Bar Association’s Headquarters in Midtown Manhattan. The event saw influential female speakers from around the world speaking on what there was to celebrate in the fight to defend and expand women’s rights but also highlighting what more needs to be done. 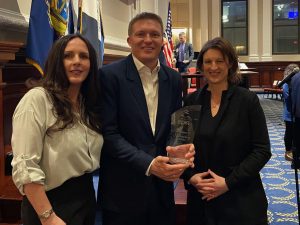 Hopeland was delighted to be included amongst some incredible winners, from fighters for justice for Yazidi women to those making waves in the boardroom and the United Nations! We were moved by their stories of injustice, and inspired by their fight to change the world.

As part of the conference, Hopeland’s newest Board Member Fiona Bassett spoke about the gender economics separating women from their children and Hopeland’s work to tackle this. Fiona is a Managing Director at Deutsche Bank’s subsidiary DWS and is widely recognized for her leadership and innovation in the financial services industry receiving acclaim from American Banker, the Institute of International Finance, Mutual Fund Industry and Crain’s New York Business.

Addressing the room, Fiona said “Hopeland is seeking to effect change through policy, through advocacy, and through campaigns that focus on mobilizing a movement to support the most vulnerable to family separation, to deliver better futures to people, and drive long term equality and opportunity”. 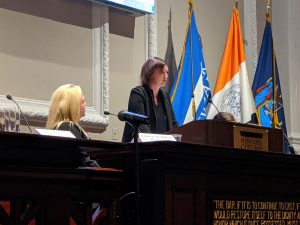 Hopeland’s number one policy goal is to prevent family separation. This forum, which focused on the progress of women internationally, was a particularly significant one at which to discuss this issue because if we improve the lives of women worldwide we also can reduce family separation.

This fact and the high prevalence of family separation (up to 500,000 children are growing up apart from their families) is why Hopeland’s global work is currently focused on Indonesia.

Hopeland and our partners are developing a landmark intervention to evaluate the impact of community support and economic empowerment tools as a cost-effective solution to address the drivers of family separation, and improve the overall wellbeing of at-risk children and families, with a special focus on households living in poverty.

Fiona discussed this work at the conference and encouraged support for it. The initiative is incredibly important because it aims to support some of the most vulnerable families in Indonesia whilst also developing vital data to change the way the world cares for families vulnerable to separation. If successful our first of its kind project can disrupt a centuries old funding model that supports orphanages and other institutions.

For too long international development and philanthropic efforts have promoted efforts that too often hurt not help vulnerable children – Hopeland is working to change that and so we were proud to be involved in such an important event and to have the opportunity to spread the message of our work.