Having been deeply impacted by the ongoing crisis in Syria, the British rock band Coldplay were prompted to write the lead single from their latest album, a song called “Orphans” which received significant praise.

Chris Martin told the BBC at the time of the song’s release about his inspiration for writing the song that, “It seems to me that one of the things that might help people have a better time is to put themselves in other people’s shoes, whether that’s these kids who have to leave Syria, or who grew up in Baltimore, or whatever it might be. Rather than judging from afar, maybe to  think ‘I wonder what it’s like to be there.” We of course completely agree with this powerful message! 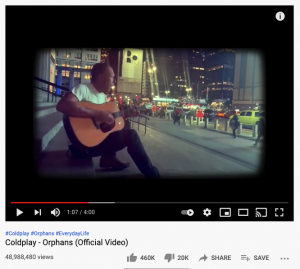 The Official Video for ‘Orphans’ by Coldplay, which features Hopeland

The music video for the track featured Hopeland in recognition of the support that Coldplay have for our mission of ensuring every child has a safe, loving home. 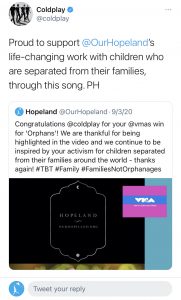 Through our work with the band we are pleased to let you know the significant impact that their goodwill has had on our cause.

Coldplay generously donated 10% of the worldwide proceeds from the song to Hopeland and our work to benefit vulnerable children. An incredible donation that helps us continue our vital mission.

Coldplay’s original manager and “fifth member” of the band, Phil Harvey tweeted his support earlier this year saying they were “proud to support Hopeland’s life changing work with children who are separated from their families, through this song.”

You can still sing and dance along to the music video knowing that thanks in part to the generosity of Coldplay our mission and work continues.