How a Game of Peek-a-Boo Could Change the World

Can a game of peek-a-boo change the world?

That was the question that an amazing 7 year old from Australia, Molly Wright, tried to find an answer to when she became one of the youngest ever people to give a TED Talk!

Molly was incredibly impressive, not just for a child, but for someone of any age! Her talk already has almost 2 million views!

She had such an important message to share and we hope you will watch the video to see what she has to say – that it is vital that every child receives the love and attention they need so that they can thrive by five! 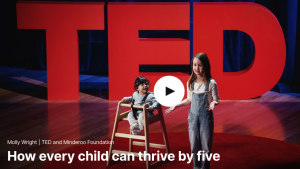 Hopeland was delighted to support this event which was hosted at the world famous Sydney Opera House in Australia earlier this year.

The talk was directed by internationally acclaimed filmmaker Michael Gracey – the Director of The Greatest Showman!

Not only is the talk informational and inspirational but it is also a lot of fun!

Maybe you didn’t expect to hear about brain science from a 7 year old but Molly breaks down the science-backed ways that parents and caregivers can support a child’s healthy brain development. We think there can’t be much more important than making sure that every child has the ability to thrive! Thank you Molly!

Unsurprisingly Molly’s important message has made headlines around the world. Her talk has even been viewed by new mothers in Afghanistan at one of that country’s largest hospitals.

We hope Molly’s message makes a difference in the lives of children worldwide!

Created by our friends at Minderoo Foundation and supported by our partners at UNICEF this talk has had a huge impact already. We hope you will join us in spreading Molly’s vital message!